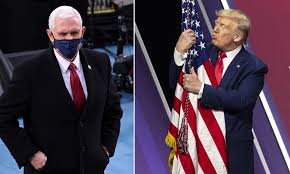 According to a source "familiar with the planning" of the upcoming event, Pence was invited to speak at CPAC 2021 but turned it down.

This comes just a day news broke that President Trump will speak at CPAC in Orlando, Florida on February 28.

Trump has remained largely silent from the political arena since he left the White House on January 20, but emerged last week to encourage his supporters that the America First movement was only just beginning.

"Our historic, patriotic and beautiful movement to Make America Great Again (MAGA) has only just begun," Trump said in a statement.

"In the months ahead I have much to share with you, and I look forward to continuing our incredible journey together to achieve American greatness for all of our people. There has never been anything like it!"

New Prince album "Welcome 2 America" to be released, will debut on 60 Minutes