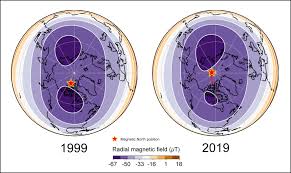 Scientists have just discovered what they say was a wild era 42,000 years ago — where the Earth's magnetic field practically disappeared. They've called it the Adams Event (after Douglas Adams of Hitchhikers Guide fame).

This was hidden previously, just before the Laschamp Excursion which we've known about since 1969. That event happened about 41,000 years ago – during which the Earth's magnetic field briefly flipped. It was a pretty big deal in itself. For 800 years the field strength fell to 28% of it's current strength and was reversed North-to-south.  Due to the weak magnetic field, the theory is that cosmic rays zinged further into the atmosphere and created a layer of enriched beryllium 10 and carbon 14 which remains to this day in a thin slice around the world buried under all the layers of dirt that came after it.

Extraordinarily, during all this, one giant Kauri tree managed to live for more than 1,700 years. It grew in New Zealand, and people got quite excited to find this log in 2019. They have now published a paper on it. (Yes, we are talking about tree rings from 40,000 years ago, and by teams that don't want to talk much about cosmic rays in the modern era. )

What's more exciting than a flipped field?  It's having almost no field at all.

As far as the climate goes, if they are correct, this would have been a very tough and wild era. Around 42,000 years ago — in the lead up to the flip, they estimate the magnetic field was so weak it was at barely 0 – 6 % of current strength. Earth's shield would have been down, gone, and the ultraviolet light and cosmic radiation was flooding in. Presumably, the ozone layer and jet streams, cloud cover, it all changes.