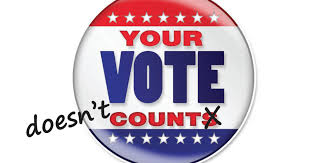 -- those remaining cases were summarily dismissed without hearing one shred of evidence, not reviewing on affidavit of thousands alleging rampant voter fraud.

We, at home, watched on our TV's when we learned of tens of thousands of ballots for Trump were being found in corn fields and at the bottom of dumpsters PRIOR to the election and nothing was every done. This is how I knew that at least 6 members of the Supreme Court are compromised, bribed or both. With all the evidence of voter fraud, and to not hear any evidence is completely suspect and likely criminal. THE RULE OF LAW IS DEAD IN AMERICA.

On February 15, 2021, I wrote the following warning which has subsequently come true?

Personally, I will not vote in another election. Why? There is no point because as anyone who has eyes to see, we all know that important elections are filled with fraud in order that the Democrats will win. So, why bother?

Americans now live in a (cancel) culture that is devoid of any civil liberty rights for the political opposition. As has been documented several times, America is headed down the path of genocide for those that will not submit. However, the Left is not yet prepared for the political and potential violence that is coming their way. Therefore, someone in the Deep State issued the order from on high for SCOTUS to hear and dispense of the cases involving voter fraud.

1 Comments in Response to THE RULE OF LAW TO TOTALLY DEAD IN AMERICA AS WE REALIZE OUR VOTES MEAN NOTHING!!!

The rule of law is NOT dead in America. It's simply not being used creatively by the people. Not all the people are dense, of course. Some use the rule of law. But even most of those who do, don't use it as effectively as they could. However, Net search on "Ammon Bundy" to see a guy who used the 12-person jury, twice, to thwart the US Government in semi-violent situations. Then wake up to the basics that Bundy isn't even aware of, it seems. Stand PRESENT in court, not represented by anyone, even yourself. And file against the judge if he doesn't let you.