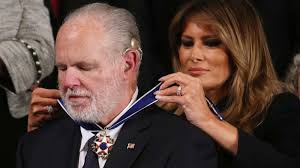 I began listening to Rush in what seemed a terrible moment, early during the first Clinton Administration. In those days, radio talk-show hosts—Joe Pine comes to mind—were malign trolls, morally crippled flying monkeys who routinely ridiculed, savaged, and insulted their guests, and were even uglier to their callers. Only reluctantly, after hearing about what a terrible creature he was, from public figures I despised, did I give this gravel-voiced Limbaugh guy a listen. And he was none of the things I expected.

Rush brought conviction and integrity to talk radio, when everybody who thought they knew better told him that was impossible. He was also informed, by "older, wiser heads" that nobody could get and hold an audience simply by talking to himself for three hours every day. I was always surprised and sad each day when it was over.

Critics tried to dismiss Rush as a clown, a fraud, a cynical huckster. Yet his massive following—remember "Rush Rooms" in restaurants?—soon became a culture unto itself of warm, kindly, welcoming individuals and individualists. They were the precursors of the historic Tea Party movement and of the teaming masses who joyfully elected Donald Trump. I bought myself a little radio—this was before cell-phones and all their apps—to carry in my pocket, so I would never miss a broadcast.

Rush always maintained that this is basically a conservative country at heart—I would prefer "freedom-loving"—and the Democrats' blatant, outright theft of a national election hasn't proven him wrong. 2020 isn't over yet, and it won't be over for decades, if need be, for centuries, until justice is finally done. The War Between the States—how's that workin' for ya?