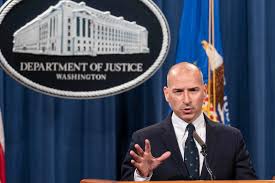 All I is see is a range of criminal offenses like disorderly conduct, assault, trespass, illegal gun possession, and "conspiracy" to commit these types of offenses. (Question: How come no one ever accuses the Justice Department of being a "conspiracy theorist," given the countless times it charges people with conspiracy?) Yet, all we continue to hear from the mainstream press and the liberal (i.e., progressive, leftist, socialist) establishment is that the protestors were hell bent on taking control of Congress.

How can anyone really buy into this nonsense, especially when the Justice Department and its grand juries are not? It's like these people live in an alternative universe in which they convince themselves of a false reality and then all reinforce it to each other.

By now, we are all accustomed to what happens when someone wants to kill people. He takes a high-powered rifle or a handgun and starts shooting people. Columbine comes to mind. So does Las Vegas. There are many other examples.