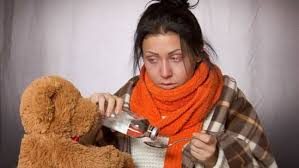 February is usually the peak of flu season, with doctors' offices and hospitals packed with suffering patients. But not this year.

Flu has virtually disappeared from the U.S., with reports coming in at far lower levels than anything seen in decades.

Experts say that measures put in place to fend off the coronavirus — mask wearing, social distancing and virtual schooling — were a big factor in preventing a "twindemic" of flu and COVID-19. A push to get more people vaccinated against flu probably helped, too, as did fewer people traveling, they say.

Flu-related hospitalizations, however, are a small fraction of where they would stand during even a very mild season, said Brammer, who oversees the CDC's tracking of the virus.

Flu death data for the whole U.S. population is hard to compile quickly, but CDC officials keep a running count of deaths of children. One pediatric flu death has been reported so far this season, compared with 92 reported at the same point in last year's flu season.