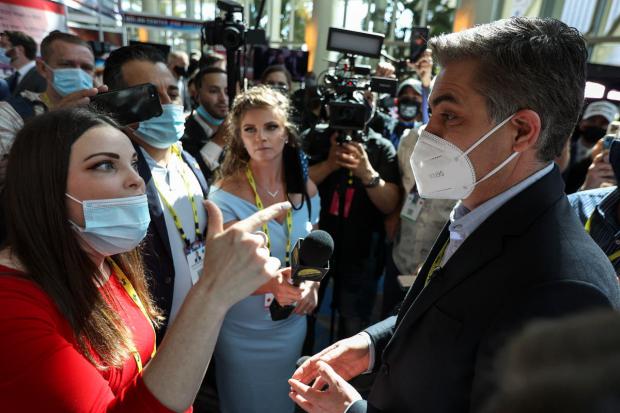 CNN's Jim Acosta was visibly flummoxed outside of CPAC in Orlando on Friday, after a crowd began chanting "CNN Sucks!" while he was trying to interview people - followed by an unexpected line of questioning from The Federalist's David Marcus - who demanded to know why CNN isn't covering two major scandals involving New York Governor Andrew Cuomo.

Acosta, visibly perturbed by the interruption, started to claim "We do, we do cover that."

Marcus pressed on - at one point parrying an attempt to 'box him out' - telling Acosta: "No, you don't. He killed 10,000 people and he's being accused of sexual assault, and you guys want to talk about Ted Cruz."

To which Acosta shot back: "Let me just finish this interview and then I'll talk to you, OK?"

Marcus then demanded that Acosta opine on Cuomo's scandals.

"I'm here to do a job right now; I'm not here to talk to you," the CNN journo shot back.