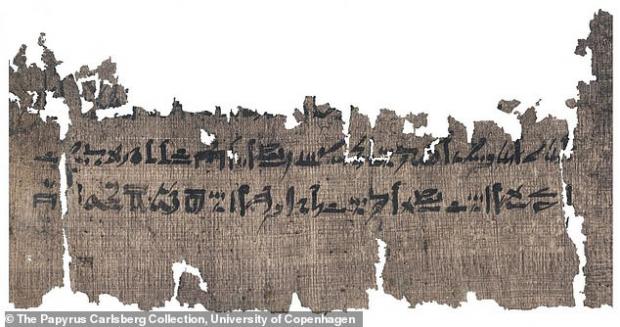 Ancient Egyptians are known for the art of mummification that wrapped the dead in bandages in order to preserve their body for the afterlife and a new discovery reveals more tails of the ritual.

A 3,500-year-old medical papyrus was translated by the University of Copenhagen, which describes instructions on how to properly cover the dead person's face.

The manuscript, dubbed the Papyrus Louvre-Carlsberg, reads like a memory aid, suggesting the reader used it to remind them of different steps and processes while performing the embalming.

It shows a list of ingredients to create a remedy consisting of plant-based aromatic substances and binders that are cooked into a liquid, with which the embalmers coat a piece of red linen.

Egyptologist Sofie Schiødt explained: The linens act like a protective cocoon of fragrant and anti-bacterial matter on the face and the process is repeated at four-day intervals.'

Although the papyrus only shares small details, it is the first time the procedure has been identified in history.

'Egyptologists were therefore surprised to find a short manual on embalming in a medical text that is primarily concerned with herbal medicine and swellings of the skin,' the university said.

The manuscript full known manuscript is split in two with one half of the papyrus belonging to the Louvre Museum in Paris and the other half is part of the University of Copenhagen's Papyrus Carlsberg Collection – giving it the name Papyrus Louvre-Carlsberg.

Amazon Says "Did Not Intimidate" Voters In Victory Over Union