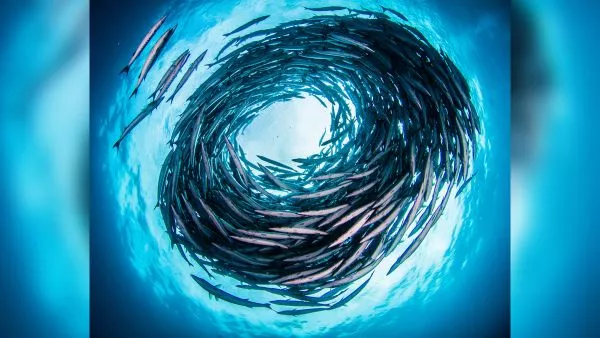 Fish school, insects swarm and birds fly in murmurations. Now, new research finds that on the most basic level, this kind of group behavior forms a new kind of active matter, called a swirlonic state.

Physical laws such as Newton's second law of motion — which states that as a force applied to an object increases, its acceleration increases, and that as the object's mass increases, its acceleration decreases — apply to passive, nonliving matter, ranging from atoms to planets. But much of the matter in the world is active matter and moves under its own, self-directed, force, said Nikolai Brilliantov, a mathematician at Skolkovo Institute of Science and Technology in Russia and the University of Leicester in England. Living things as diverse as bacteria, birds and humans can interact with the forces upon them. There are examples of non-living active matter, too. Nanoparticles known as "Janus particles," are made up of two sides with different chemical properties. The interactions between the two sides create self-propelled movement.

To explore active matter, Brilliantov and his colleagues used a computer to simulate particles that could self-propel. These particles weren't consciously interacting with the environment, Brilliantov told Live Science. Rather, they were more akin to simple bacteria or nanoparticles with internal sources of energy, but without information-processing abilities.