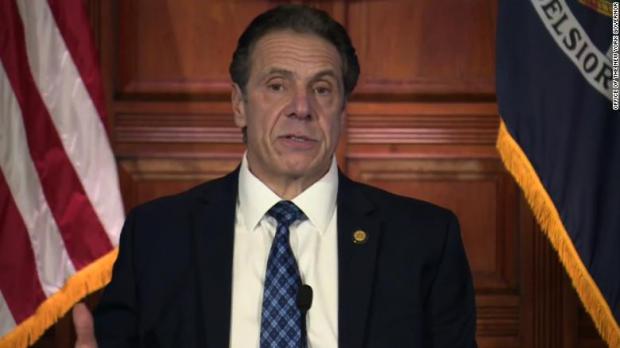 New York Governor Andrew Cuomo choked up on Wednesday as he apologized over sexual harassment claims but insisted he never touched 'anyone' and vowed to fully cooperate with the Attorney General's investigation in to him.

The governor held a 40-minute briefing, hours after being slammed by Mayor de Blasio for hiding from the public and media amid the ongoing pandemic.

Three women have alleged misconduct, including two former aides who both say he made inappropriate remarks towards them that were sexual.

One of those aides also claims he forcibly kissed her on the mouth. A third woman came forward after them claiming that he'd asked to kiss her at a wedding. A photo of them at the wedding emerged in which he is clasping her face.

On Wednesday afternoon, Cuomo started by briefing the media via Zoom on the state's COVID progress and making several announcements about reopening the state.

He then, before taking questions, addressed the scandal, refused to resign despite calls for him to do so, and urged the public to wait for the findings of the investigation.

He also defended his touchy-feeling ways, saying hugging and kissing were his 'customary way of greeting people' and that it's what his father, the late governor Mario Cuomo, also did.

'As you know the Attorney General is doing an independent review. I will fully cooperate with that review. The lawyers say I shouldn't say anything when you have a pending review - I understand that I am a lawyer too.