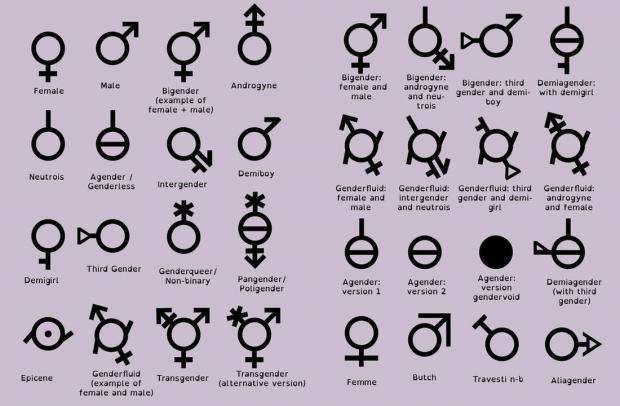 Did you know there are 112 genders??? Isn't it just amazing the lengths with which LIBTARDS will go to in order to invent entirely alternate "realities"??  These people will actually destroy their own familes, and not give it a second thought. Libtardism is truly a mental disorder. That's not even debateable anymore. When a culture sinks so low as to deny the most basic of biological facts, and then sinks even lower by inventing new "facts" … then the end of that culture is inevitable.

Here are all of them listed alphabetically with a description:

Abimegender: a gender that is profound, deep, and infinite; meant to resemble when one mirror is reflecting into another mirror creating an infinite paradox.

Adamasgender: a gender that refuses to be categorized.

Aerogender: a gender that is influenced by your surroundings.

Aesthetigender: a gender that is derived from an aesthetic; also known as videgender.

Affectugender: a gender that is affected by mood swings.

Agender: the feeling of no gender/absence of gender or neutral gender.

Agenderflux: being mostly agender except having small shifts towards other genders making them demigenders (because of the constancy of being agender).