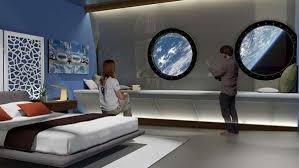 Orbital calls itself the "world's first large-scale space construction company" and has grand ambitions to build the first space hotel in low Earth orbit, beginning in 2025. The hotel will be equipped with restaurants, a cinema, spa, and space pods (rooms) for 400 people.

The 3-year-old company plans to use robots to construct the celestial hotel shaped like a Ferris wheel. The 650-foot-wide wheel-shaped structure will spin with an angular velocity high enough to generate moon-like levels of artificial gravity for occupants.

If realized, Voyager Station will be the biggest human-made structure in space. It will be made up of a series of rings, with modules attached to the rings' outermost area.Some of these 24 modules will house crew quarters, power systems, research labs, and supplies.

The rotating wheel space station was an idea derived out of the 1950s from aerospace engineer Wernher von Braun.