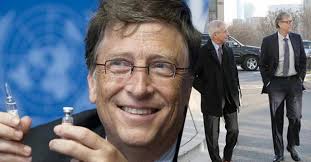 He used this TED presentation to promote his vaccination programs, literally saying, "If we are doing a real good job vaccinating childen, we can reduce the world population by 10% to 15%".

The video, the first 6'45", "The Truth about Bill Gates and his Disastrous Vaccination Program", will tell you all about it.

Monkeypox -How Bad Is It?

Emergency WHO meeting over Monkeypox spread: 'We should take it seriously'

Russia Moves To Withdraw From WTO, WHO

Dozens of Governments Commit to Signing WHO Pandemic Treaty

MAY DAY! MAY DAY! WILL THE USA SURVIVE THE MONTH OF MAY?

The WHO Pandemic Treaty - What It Really Means...

This pandemic treaty is the greatest power grab any of us has seen in our lifetime, says Neil Oliver