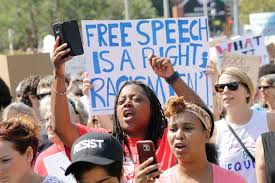 It's a given that the government is corrupt, unaccountable, and has exceeded its authority.

So what can we do about it?

The first remedy involves speech (protest, assembly, speech, prayer, and publicity), and lots of it, in order to speak truth to power.

The First Amendment, which is the cornerstone of the Bill of Rights, affirms the right of "we the people" to pray freely about our grievances regarding the government. We can gather together peacefully to protest those grievances. We can publicize those grievances. And we can express our displeasure (peacefully) in word and deed.

Unfortunately, tyrants don't like people who speak truth to power.

The American Police State has shown itself to be particularly intolerant of free speech activities that challenge its authority, stand up to its power grabs, and force it to operate according to the rules of the Constitution.