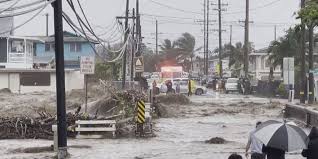 Ige said the declaration speeds up the state's process to spend funds and dispatch first responders to affected areas.

"The declaration supports the state's efforts to provide quick and efficient relief of suffering, damage, and losses caused by flooding and other effects of the heavy rains," the governor said.

he emergency order was declared after a dam overflowed on the island of Maui. Flooding wiped out homes, caused landslides, and left some areas completely devastated.

The emergency declaration covers Maui, Kalawao, O'ahu, and Kaua'i and continues through May 8.

The Honolulu Department of Emergency Management evacuated people in Waleiwa, a North Shore community in the Waialua District of the island of O?ahu, earlier this week and placed them in emergency shelters.