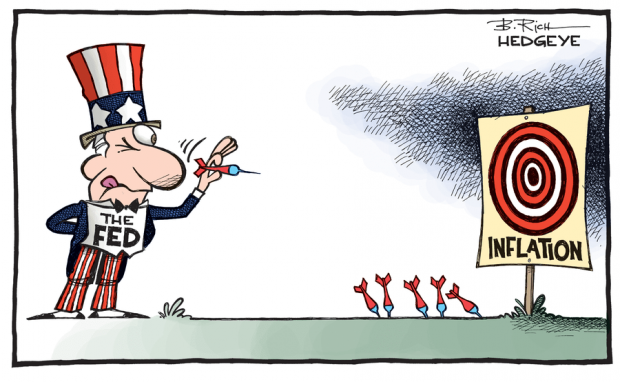 They believe that the central bank will pivot to tighter monetary policy sooner than expected as inflation heats up, even though Jerome Powell keeps insisting inflation isn't really a problem. In a recent podcast, Peter Schiff said that the truth is the Fed is between a rock and a hard place. It couldn't fight inflation even if it wanted to. Doing so would kill the economy. The only other choice is to surrender to inflation.

Late last week, Jerome Powell sat down for a televised interview with the Wall Street Journal. The topic of conversation was long-term interest rates. The reporter noted that traders were pricing higher inflation into the yield curve. As Peter has been saying, the increase in interest rates has little to do with economic growth and everything to do with inflation. Although he didn't come right out and say it, Powell implied that that market is wrong. The Fed chair insists he does not think inflation is a threat.

In fact, Peter said if you listen closely to what Powell said, it's clear he still thinks the real problem is a lack of inflation. Powell admits that he thinks there will be a sharp jump in consumer prices around the middle of the year. But he said this is just because prices are being compared to the middle of 2020 after there was a big drop due to the coronavirus economic shutdowns. So, in Powell's mind, this isn't a fair comparison.