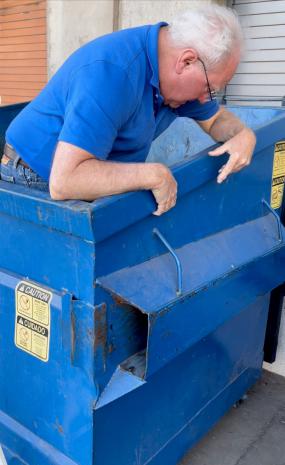 A retired Purple Heart veteran who took a dive in a dumpster on Saturday and found illegally shredded ballots in Maricopa County which are now reportedly wanted by the state.

(This post was updated after the Arizona Attorney General's Office contacted us on Monday evening and shared that there are no warrants for the veteran's arrest they just want to take custody of the shredded ballots.)

Yesterday it was reported that a man by the name of Earl S, who found shredded ballots in a dumpster backed up to the loading dock outside of the Maricopa County Tabulation Center was being sought after by the state.  It was reported that Earl was being sought for his actions related to obtaining shredded ballots in a dumpster from the Maricopa County Tabulation Center.  The Arizona Attorney General's office contacted us and said that there are no warrants for Earl's arrest.  The Arizona Attorney General's office does want to take possession of the shredded ballots, however.  (See update below)

An Arizona resident who knows Earl shared this story with us:

Earl fought for the United States, one of the first Marine's on the ground in some of the most grisly wartime conflicts of all time.  He himself was shot, was sprayed with Agent Orange, and is the last survivor of his Platoon.   He put his life on the line in combat and is still fighting for the rights of the American people.   He had reason to believe based on a tip, that ballots were being destroyed in Maricopa County.

On Saturday morning he went to the Maricopa County Tabulation Center into the open public parking lot and saw dumpsters out in front of the area that had been open the day before.  Suspicious of an abandoned unidentified bag in the dumpster, Earl went ahead and retrieved the trash believing that a crime had been committed.  Upon retrieving the bag, he discovered shredded ballots inside.   Based on that knowledge and his concern that the crime of shredding ballots was still being performed, Earl went to the loading dock door to attempt to peek inside and gain video evidence of any ongoing crime. His intent was not to gain access to the facility.  There is proof that ballots and voting documents were destroyed in the materials that had been abandoned.