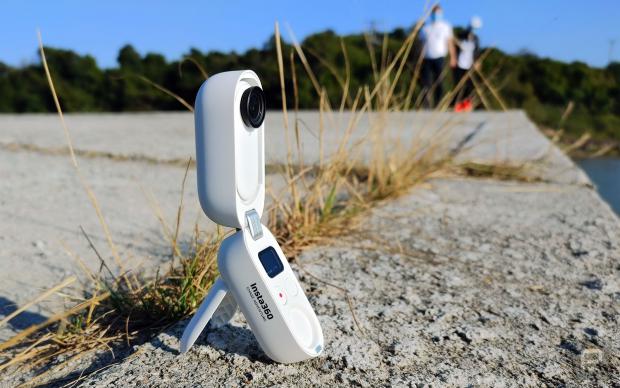 Like the original Go, the Go 2 features Insta360's FlowState digital image stabilization technology for smoothing out shaky shots. It can also likewise be clipped onto your clothing using a two-part magnetic mount, although other mounting options are available.

Footage is captured via a 120-degree fish-eye lens, along with a 1/2.3-inch image sensor which is larger than that of the Go. Video is recorded at a default resolution of 1440p/30fps, up slightly from the Go's 1080p.

One charge of the Go 2's 210-mAh battery should reportedly be good for a runtime of 30 minutes, if the camera is just used on its own. It can, however, be placed within an included 1100-mAh battery-equipped charging case, which should keep it going for 150 minutes. That case can also be used as a mini tripod-like stand for the camera, or as a wireless Bluetooth remote control to start and stop recording.

As is the case with many other diminutive video cameras, users line up shots and review footage via an iOS/Android app on their paired smartphone. That app also allows them to change settings and access features such as time-lapse and 1080p/120fps slow motion.