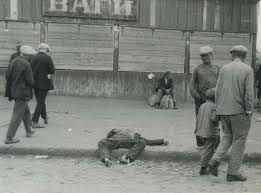 Stalin and his followers were determined to teach Ukraine's farmers "a lesson they would not forget" for resisting collectivization, which meant giving up their own land to work on government controlled farms. Moreover, the famine was meant to deal "a crushing blow" to any aspirations for independence from the Soviet Union by the Ukrainians, 80 percent of whom worked the land.

While millions of people in Ukraine and in the mostly ethnically Ukrainian areas of the northern Caucasus were dying, the Soviet Union was denying the famine and exporting enough grain from Ukraine to have fed the entire population. For 50 years, surviving generations were forbidden to speak of it, until the Soviet Union was near collapse.

The purpose of this website is to help students and the general public learn more about the Holodomor and how this knowledge is relevant to understanding today's world.

How?   The website's Information Links bibliography directs you to well over 200 additional resources in the English language about the Holodomor.

Nearly 150 resources – text, visuals, video – can be accessed directly from your electronic device via the highlighted links.