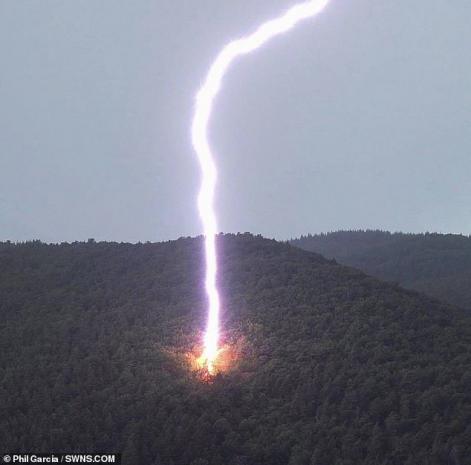 A US hiker has perfectly captured an amazing photo of a gigantic lightning bolt striking a mountainside.

The perfectly-timed photo was taken by Phil Garcia, while out hiking with his friends in Pecos, New Mexico.

Garcia, 28, who works at a ski resort in Santa Fe, only managed to grab one shot of the purple-tinted bolt during adverse weather.

It was so immense that it destroyed a tree in the process, leaving only its trunk.

'We were hiking up in the back trails when we saw one pop off right before that one so I pulled out my camera,' Garcia said.

'The sound – it was wild. We were kind of worried, so we got out of there pretty quick.

'You could feel the energy. It blew the tree into what had to be a million pieces – all that was left was the trunk. It was just smouldering.'

Garcia took the picture last June but has only just posted it to a New Mexico community group on Facebook.

He called the blast 'deafening' and said the picture was a combination of 'pure luck and right timing'.

'It was raining so hard it put it out. It was super loud wish I had a video of it,' he said.

'I was only 400 yards away from it – my ears rang for about five hours after.'