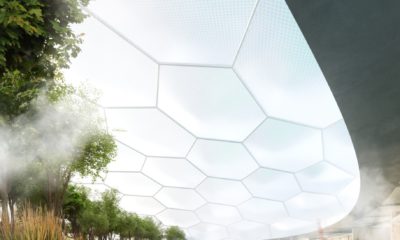 Named Hot Heart, plans call for a series of manmade islands that will store thermal energy and use some of that heat to create a tropical paradise.

Assuming it actually goes ahead, Hot Heart will be situated off the coast of Helsinki and consist of an archipelago of 10 manmade islands that can be thought of as huge water basins. Each will measure 225 m (738 ft) in diameter and hold up to 10 million cubic meters (roughly 35 million cubic ft) of water.

According to CRA, the system will act like a big thermal battery. So, using heat pumps, energy drawn from wind, solar, and other renewable sources will be converted into heat, stored as hot water in the tanks, then withdrawn and pumped into the city's heat distribution network as required. CRA told us that the system would work with existing renewable energy sources and adapt as the numbers of solar panels and wind turbines in the country continue to grow. More impressive still, it could eventually provide all of Helsinki's heating needs.

Additionally, thanks to all the heat being produced, four of the islands will be able to serve as recreational destinations, with pools and tropical forests and plants installed. The idea is that they will be encased with a transparent dome and LED lighting, allowing locals an escape from the winter chill (presumably they'd need to be reached by boat but such practicalities aren't addressed at this early stage).

"Production of renewable energy is getting cheaper, but storage is still extremely expensive," says CRA. "Our idea is to use the giant 'thermal batteries' to store energy when prices are at low or even negative levels, and extract it when required by the district heating system when demand is high. This model would also be applicable to many coastal cities with similar climates.