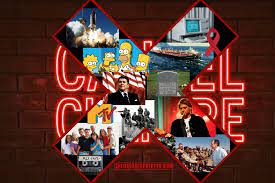 A recent article railing against "Cancel Culture" by Matthew Hennessey is a reasonably decent piece about how the vicious virtue signaling of woke leftists destroys the country and culture itself. In Hennessey's article, he argues that Generation X is the only thing that can stop it. He offers a rallying cry to other members of his generation to stand up against the Army of the Offended to save free speech and expression.

We grew up in a country that didn't ban books. We all agreed that witch hunts and blacklists were bad. Censorship was an outrage. The 1980s were not that long ago. Don't act like you don't know what I'm talking about.

So obviously we've got a problem here. Everybody can see it. Everybody knows where it's heading. What we don't have — yet — is a group of people who are willing to do something about it.

The generation that fought for its right to party should be leading the charge against these millennial Maoists terrorizing the culture via social media. Why aren't we?

Generation X is generally defined as the demographic of people born between 1965 and 1980.

Fair enough. But, Millennials did NOT invent Cancel Culture

Hennessey's article is worth the read, particularly if you're a member of Generation X. However, he, unfortunately, misses the point of what's happening and who is responsible.

Laying the blame for cancel culture at the feet of millennials is incredibly short-sighted. The millennial generation inherited an America offering service jobs instead of high-wage skilled employment, a higher education system staffed with radical Marxist activists, and an entertainment industry designed to promote the destruction of traditional American culture.