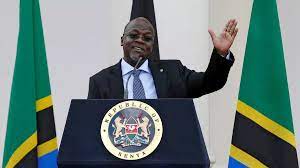 After weeks of being out of the public eye, Tanzania's President John Magufuli has died age 61, according to the country's Vice President.

The global press are reporting the death of Tanzania's "Covid denying President" with barely disguised glee.

The official cause of death is rumoured to be a heart attack, but some are implying it may have been due to the virus. The Economist, for example reports:

Many believe the virus was to blame".

As if what "many believe" really means anything.

However it happened – whether virus or heart attack or, ahem, "suicide" – the long and short of it as that Magufuli is gone. Just as we predicted only a few days ago.

So what now for the East African nation? Well presumably Magufuli's successor – be it the Vice-President, or a hastily elected new leader (perhaps the head of the opposition, given so many column inches in recent weeks) – will take the reins of the country.

1 Comments in Response to President Magufuli Dead at 61