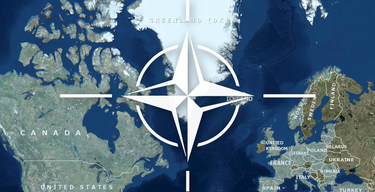 The piece is written by Sara Bjerg Moller, an assistant professor in the School of Diplomacy and International Relations at Seton Hall University. She argues that after 30 years since losing the Soviet Union as its official enemy and struggling to find a replacement to justify its continued existence, a perfect replacement would be China.

I've got a better idea. Let's just put NATO out of its misery and terminate it.

After all, let's not forget NATO's original mission: to defend Europe from the possibility of an invasion by the Soviet Union, which had been America's and Britain's World War II partner and ally but which had been converted to their official enemy at the end of the war.

But the likelihood of a Soviet invasion of Europe was always nil. The Soviet Union had been decimated by World War II, especially as a result of the German invasion of the country. Even though the invasion was ultimately repelled and Germany was defeated, the Soviet Union's industrial capacity had been destroyed, not to mention the millions of Russian citizens who had been killed. The last thing the Soviet Union wanted was another war, especially given that the United States possessed nuclear weapons and had shown a willingness to employ them against large cities.

The advocates of a national-security state in the United States, however, needed a new official enemy to replace Nazi Germany, especially to justify the conversion of the U.S. government from a limited-government republic to a national-security state, a type of governmental structure with omnipotent, non-reviewable powers. The Soviet Union and "godless communism" fit the bill perfectly. The American people were then inculcated with the notion that there was an international communist conspiracy to take over the United States and the rest of the world that was based in Moscow, Russia.