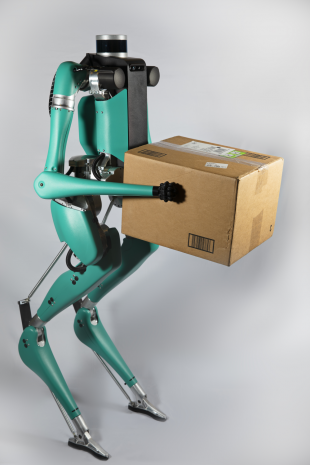 But there's a common problem developing among many of these robot-delivery vehicles. How do packages go from the delivery vehicle to the customer's doorstep?

Some have proposed drones, while others, such as Oregon-based Agility robotics, have proposed a bi-pedal robot deployed from the rear of a robot-delivery van that will walk the package to a customer's doorstep without the risk of face-to-face interaction.

Agility intends to solve not the last-mile delivery problem but the last-foot delivery issues from robot-van to customer's doorstep.

The goal of the robot, dubbed "Digit," is to reach complicated areas where traditional robots would have issues traversing, such as stairs, tight spaces, and other complex terrains.

Agility Robotics founder Jonathan Hurst told local news station KOBI that Digit "can lift a 40-pound package." He said, "the robot catches itself when it falls and reorient to get back up."

Hurst outlined the most significant problem in last-mile deliveries:

"Once you've got an autonomous vehicle that does a lot of it on the road. But now you're stuck at the curb, right? And in order to really provide that service that people want, you need to then get from the curb to the doorstep. And that's where we solve this problem."

Agility has sold two prototype robots to Ford Motor Company, who experimented with the bi-pedal robot launched from the rear of an autonomous delivery van to take a package from the vehicle to the customer's doorstep.

"So many jobs that are basically robot jobs, they're the dull, dirty, dangerous kinds of things that are injury prone and incredibly repetitive," Hurst said. "That's how you can then really increase the value of the jobs that the people get to do."