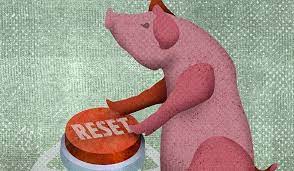 Currently, transnational globalists are pushing for a "Great Reset."  It helps to understand what's coming at us if you remember that the globalist's mindset is akin to a zookeeper's.  Currently, the zookeepers have their animals safely confined, but there remains a modicum of hope that the animals can liberate themselves.

First some context.  History is replete with ideologies that seek to save people either from themselves or a foreign contagion.  Until recently, this impulse, as the 20th century shows, has taken the form of political ideologies.

For those espousing Marxism, the ideology sought to cleanse a people from the errors and machinations of the past.  When the new ideas prevailed, even if only briefly, the alleged salvation from historical, social, and economic maladies required a reset of just about everything.  More often than not, the reset was accompanied by a sea of blood and violence.  The objects of salvation (the people) often died or ended up in the same circumstances or were worse off.

Monkeypox: 'Fool Me Twice, Shame On Me'

Situation Update, May 20, 2022 - China preparing for "D-Day" INVASION of the continental U