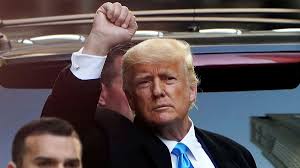 For years, Trump favored Twitter and had amassed nearly 90 million followers before the social media platform suspended him in January. Facebook, YouTube, Twitch, Snapchat, and others also moved to suspend the former president—and at the same time, Trump hasn't indicated that he would use other social media websites favored by conservatives such as Gab, MeWe, or Parler.

Miller told Fox News on Sunday he expects Trump will "[return] to social media in two or three months" with "his own platform" that will "completely redefine the game" and attract "tens of millions" of users.

Miller, who is Trump's most prominent spokesman, did not elaborate on details or a possible name for the social media venture.

Since Twitter suspended his account, the former president has instead opted to release press statements via advisers and email. For the most part, he has released statements endorsing his favored political candidates for the 2022 midterm elections.

Also in the interview, Miller said that Trump still holds a considerable amount of sway in the Republican Party.