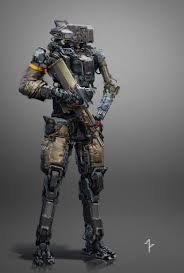 While the US, China, and Russia, along with other countries, race to modernize their forces with robotics, artificial intelligence, stealth fighters, new main battle tanks, upgraded infantry weapons, and, of course, how could we forget, hypersonic weapons, it appears the US is destined for war.

Kuznetsov, also a futurologist, explains while combat robots were only for wealthy countries, technological costs have dramatically dropped, allowing developed countries to obtain advanced weaponry. He said the side with the most advanced robots has a higher probability of winning future battles.

"Previously, robots in the army were the lot of wealthy countries such as the United States. Now Turkey and Israel have broken through the barrier and are making aircraft drones a mass product, which, as we have seen from the example of Azerbaijan, make a significant contribution to the outcome of hostilities. War is turning into a competition of economies: whoever has assembled more and better robots is more successful in solving problems on the battlefield, "Kuznetsov said.