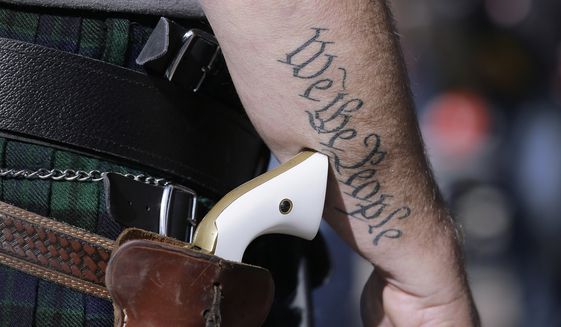 SAN FRANCISCO (CN) — Americans have no right to carry guns in public, a divided en banc Ninth Circuit panel ruled Wednesday, reversing a prior Ninth Circuit decision that struck down a Hawaii firearm restriction as unconstitutional.

"There is no right to carry arms openly in public; nor is any such right within the scope of the Second Amendment," U.S. Circuit Judge Jay Bybee, a George W. Bush appointee, wrote for the majority of an 11-judge panel in a 127-page opinion.

Looking back on 700 years of legal history dating back to 14th century England, seven judges in the majority found "overwhelming evidence" that the law has never given people "an unfettered right to carry weapons in public spaces."

The seven-judge majority traced legal texts and laws back to 1348 when the English parliament enacted the statute of Northampton, which banned carrying weapons in fairs or markets or before the King's justices. It also cited multiple laws from colonial and pre-Civil War America in which states and colonies restricted the possession of weapons in public places.

"The Second Amendment did not contradict the fundamental principle that the government assumes primary responsibility for defending persons who enter our public spaces," Bybee wrote. "The states do not violate the Second Amendment by asserting their longstanding English and American rights to prohibit certain weapons from entering those public spaces as means of providing 'domestic tranquility' and forestalling 'domestic violence.'"

1 Comments in Response to Carrying Guns in Public Is Not a Constitutional Right, Ninth Circuit Rules

But there is right to carry your private property under the 1st Amendment, as adjudicated as the right to travel. Also, the right to do anything is guaranteed under the 9th Amendment. Running naked down the street is not offensive. It is a right, if one claims it as a right properly.