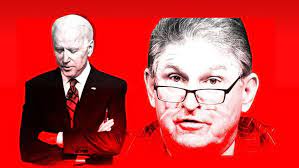 He bid his party down a bit, although only a bit, on elements of the COVID relief bill so one would think that a new package that would spend a trillion dollars more than that bill did might freak him out.

Not so. It sounds like he's ready for a blockbuster, and for the tax hikes that'll pay for it.

Which leads to two assumptions. One: There'll be a lot of candy for West Virginia in this infrastructure bill. And two: Manchin's probably going to disappoint the left on H.R. 1 and gun control and may be calculating that this is a way to make it up to them. If he can't give them what they want culturally because his red state's majority won't tolerate it, he can at least give them what they want economically.

"I'm sure of one thing: It's going to be enormous," the West Virginia Democrat, who is seen as a swing vote in a chamber divided 50-50, told reporters at the Capitol.

While he didn't predict a price tag, Manchin said Congress should do "everything we possibly can" to pay for it. He said there should be "tax adjustments" to former President Donald Trump's 2017 tax law to boost revenues, including by raising the corporate rate from the current 21 percent to at least 25 percent.

Some of the tax benefits in the Republican law were "weighted in one direction" and could be reversed, Manchin said. He also suggested an "infrastructure bank" paid for with revenues, potentially a value-added tax, that would be used for "rebuilding America."…

"Where do they think it's going to come from?" he asked. "How are you going to fix America?"

We're going to get a VAT on top of our federal income tax? What happened to letting the rich pay for all of this?