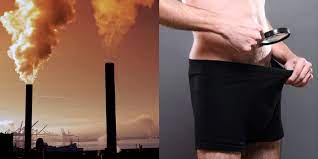 In a new book called Count Down, Dr Shanna Swan writes that humanity is facing an "existential crisis" due to phthalates, a chemical used in the plastic manufacturing process which disrupts the endocrine system.

A growing number of babies are being born with small penises as a result of phthalate syndrome, something that has been observed in rats when they are exposed to the chemical in tests.

Human babies are being exposed to the chemical in the womb, causing a shorter anogenital distance which correlates to penis size.

"Phathalates mimic the hormone oestrogen and thus disrupt the natural production of hormones in the human body, which researchers have linked to interference in sexual development in infants and behaviours in adults," reports Sky News.

The chemical, which is used to make plastics more flexible, is being transmitted to humans via toys, food and other items.

Swan cautions that "our modern world is threatening sperm counts, altering male and female reproductive development, and imperilling the future of the human race."