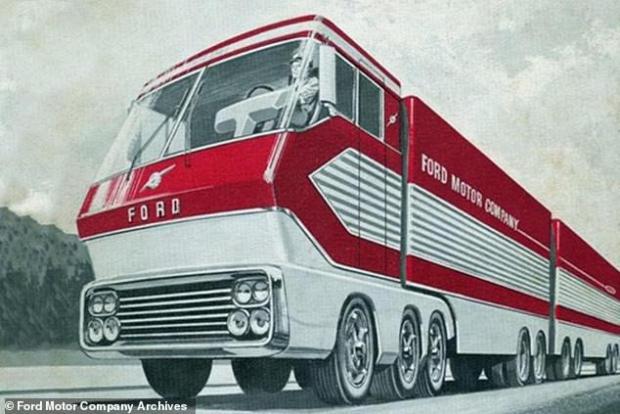 When it was unveiled at the 1964 World's Fair in New York City, Ford's monolithic turbine-powered truck - affectionately dubbed 'Big Red' - was hailed as the future of motoring.

At 13 feet tall, it stood two and a half times the height of an average car. Its tandem trailers, stretching out 100 feet, were twice the length of a Tyrannosaurus rex.

And its futuristic 600-horsepower gas turbine engine convinced both the car-loving public and Ford motor executives that Big Red would usher in a new era of American motoring.

Big Red's cab could hold a kitchen complete with beverage dispensers, a refrigerator, and an oven. There was also an incinerator toilet and a television that was visible from the passenger's seat.

Top executives at Ford were keen to capitalize on its fame and mass-manufacture the prototype, but the gas-guzzling turbine-powered engines swiftly led to its downfall.

But sheer good fortune saw it not only survive, but be lovingly restored to its former glory, by a secretive truck enthusiast who has agreed to tell Big Red's story for the first time.

Big Red's whereabouts have been the source of feverish speculation on internet message boards and at auto shows for decades.

But now Lee Holman, owner of Ford's former factory-sponsored racecar team Holman-Moody, has told  The Drive the bizarre tale of how he came to own Big Red's cab for a period in the 1970s.

After the 1964 World's Fair, Big Red had criss-crossed the country attending car fairs and promotional events for Ford.