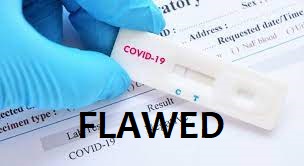 The Real Time Reverse Transcription Polymerase Chain Reaction (rRT-PCR) test was adopted by the WHO on January 23, 2020 as a means to detecting the  SARS-COV-2 virus, following the recommendations of  a Virology research group (based at Charité University Hospital, Berlin), supported by the Bill and Melinda Gates Foundation. (For Further details see the Drosten Study)

Exactly one year later on January 20th, 2021, the WHO retracts. They don't say "We Made a Mistake". The retraction is carefully formulated.

While the WHO does not deny the validity of their misleading January 2020 guidelines, they nonetheless recommend "Re-testing" (which everybody knows is an impossibility).

The contentious issue pertains to the number of amplification threshold cycles (Ct). According to Pieter Borger, et al

The number of amplification cycles [should be] less than 35; preferably 25-30 cycles. In case of virus detection, >35 cycles only detects signals which do not correlate with infectious virus as determined by isolation in cell culture…(Critique of Drosten Study)

The World Health Organization (WHO) tacitly admits one year later that ALL PCR tests conducted at a 35 cycle amplification threshold (Ct) or higher are INVALID. But that is what they recommended in January 2020, in consultation with the virology team at Charité Hospital in Berlin.

Are We Overdosing on "Hopium?"