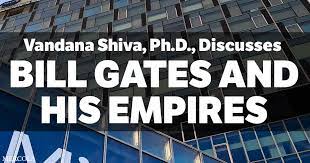 We're currently facing enormously powerful technocrats who are hell-bent on ushering in the Great Reset, which will complete the ongoing transfer of wealth and resource ownership from the poor and middle classes to the ultra-rich. Perhaps the most well-known of the individuals pushing for this is Bill Gates who, like John Rockefeller a century before him, rehabilitated his sorely tarnished image by turning to philanthropy.

However, Gates' brand of philanthropy, so far, has helped few and harmed many. While his PR machine has managed to turn public opinion about him such that many now view him as a global savior who donates his wealth for the good of the planet, nothing could be further from the truth.

The magnitude of Gates' role over global health recently dawned on me. I believe the COVID-19 catastrophe would not have been possible had it not been for the World Health Organization, which Gates appears to exert shadow-control over. Remember, it was primarily the WHO that facilitated this global shutdown and adoption of freedom-robbing, economy-destroying measures by virtually every government on the planet.

When then-President Trump halted U.S. funding of the WHO in 2020, Gates became the biggest funder of the WHO. As explained in "WHO Insider Blows Whistle on Gates and GAVI," the WHO has turned global health security into a dictatorship, where the director general has assumed sole power to make decisions that member states must abide by, but according to a long-term WHO insider, Gates' vaccine alliance GAVI actually appears to be the directing power behind the WHO.