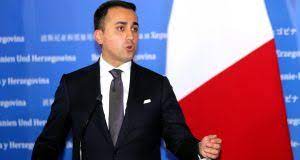 Russian Ambassador Sergei Razov had been immediately summoned and informed of the drastic punitive action.

The case reportedly involves an Italian navy captain who was caught passing secret documents belonging to the NATO member state to a Russian military official on Tuesday night. The Italian navy officer is alleged to have received money in return.

It's since escalated into a major diplomatic spat between Italy and Russian, with the Kremlin now vowing retaliation for the expelling of the two diplomats. Western allies are now weighing in on the dispute, fueling the controversy further, with British Foreign Secretary Dominic Raab saying the UK "stands in solidarity with Italy and its actions today, exposing and taking action against Russia's malign and destabilising activity that is designed to undermine our NATO ally."

Here are the few details known related to the spy charges as laid out in Reuters:

The Italian, a captain of a frigate, and the Russian, who was accredited at the embassy, were accused of "serious crimes tied to spying and state security" after their meeting on Tuesday night, Italian Carabinieri police said.

The suspects were not officially identified. A police source said the captain was called Walter Biot, adding that he added accepted 5,000 euros ($5,865) in return for the information.