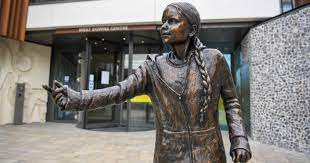 The University of Winchester proudly revealed the 'inspirational' statue', claiming it was the first life-size sculpture of the Swedish campaigner.

However, critics blasted the statue as indicative of a cult of personality, while others questioned how much carbon emissions were emitted in the making of the structure.

The university's student union also voiced opposition to the statue, which cost £24,000, saying the money could have been spent on better things.

"We're in a Covid year, lots of students haven't really had access to campus, lots of them are trying to study online and are in dire need of support," said President of Winchester Student Union Megan Ball.

"We are calling on the university to match the statue cost by committing £23,760 in additional funding to student support services across campus."