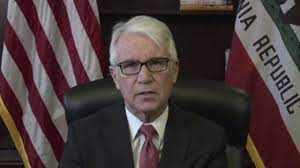 "What we're hearing is that the Hardcore Gang Unit will be dissolved," said one of the DA's prosecutors, who spoke on condition of anonymity.

"My understanding is there's going to be a dissolution of the unit either April 1 or April 2," said a second prosecutor, who say they feel they've been "hamstrung by Gascón's decision to ban them from using gang and gun enhancements, and they feel that disbanding the unit will be a disaster waiting to happen, given the violent crime surge across Los Angeles," according to the report.

"We can already hear in jail calls and interviews with officers on the street telling us that the gang members are laughing at them, I mean it's undermined the credibility of law enforcement in its entirety," one of the prosecutors told Fox11.

The Hardcore Gangs unit - responsible for prosecuting the most "heinous and complex gang-related crimes in the county" - is currently juggling 700 active cases, according to FoxLA's Bill Melugin. What's more, "the LA DA Office's Major Narcotics unit had a meeting with upper management at 3pm and were informed that their unit will be cut by as much as half."