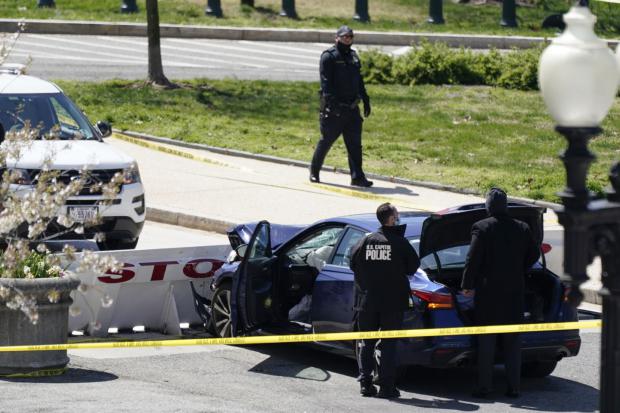 The mayhem — which one high-ranking cop called "senseless" — erupted shortly after 1 p.m., sending the government building into lockdown and drawing a massive response from law enforcement authorities and the National Guard.

The slain cop was identified by the Capitol Police as William "Billy" Evans, an 18-year veteran of the force.

His killing came less than three months after the deadly Capitol riot in which a fellow officer, Brian Sicknick, was among five fatalities.

The driver was identified as Noah Green, 25, of Indiana, according to NBC News, which cited four law enforcement officials briefed on the matter.

Green died after being taken to a hospital, as were the two cops mowed down.

Acting Capitol Police Chief Yogananda Pittman appeared to struggle with her emotions as she revealed one of the cops had died.

"It is with a very, very heavy heart that I announce that one of our officers has succumbed to his injuries," Pittman said during a news conference.

At the time, Pittman said she couldn't yet identify the slain cop "because we still have to notify the next of kin."

"This has been an extremely difficult time for US Capitol Police after the events of Jan. 6 and now the events that have occurred here today," she said.