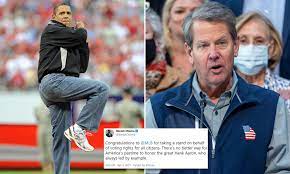 'Boycott baseball and all of the woke companies that are interfering with Free and Fair Elections. Are you listening Coke, Delta, and all!' Trump said

'This is unbelievable, I mean really unfortunate today that MLB has folded up and caved to the cancel culture and to a bunch of liberal lies,' he told Tucker Carlson

The game was set for July 13 at Truist Park, the Braves' 41,000-seat stadium in suburban Cobb County. MLB is now scrambling to finalize a new venue