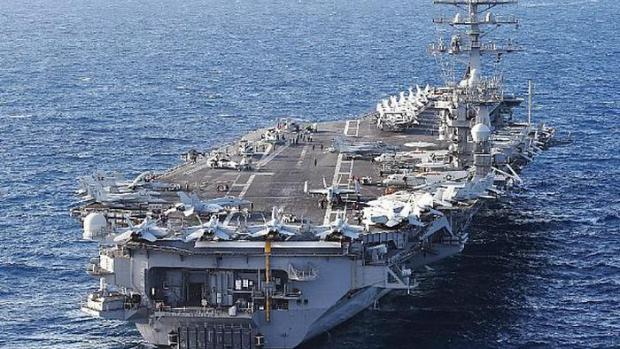 Long after the demise of the 'Islamic State' and its short-lived territorial caliphate in eastern Syria and western Iraq, the US continues now to seek operations in the Levant ostensibly to "counter ISIS". Of course, this is but the excuse given to maintain a muscular stance in the region as US pressure continues and the sanctions choke-hold against Assad and the Iranians deepens the regional crisis, also as Russia is more deeply entrenched in Syria.

And now in 2021 we are still witnessing headlines like this: "Eisenhower Strike Group Joins Anti-ISIS Effort". The Pentagon this week announced that the USS Dwight D. Eisenhower strike group has initiated flight operations in the Eastern Mediterranean "to support the continuing campaign against Islamic State remnants in Syria and Iraq."

While in the past weeks there's been an uptick in reports that suggest ISIS might be seeking to stage a major comeback in the region, the carrier presence could also in reality be aimed at thwarting things like the below...

In announcing the Eisenhower's new Eastern Mediterranean deployment, strike group commander Rear Adm. Scott F. Robertson, said "We can provide a wide range of options to our nation and allies in deterring adversarial aggression and disruption of maritime security and regional stability."

The carrier presence also comes as Idlib is still occupied by al-Qaeda terrorists (since 2015), which Russia and the Syrian Army have long sought to return to Damascus, but never having launched a final massive assault (in large part due to counter-threats from Washington of US military intervention to "save" Idlib).