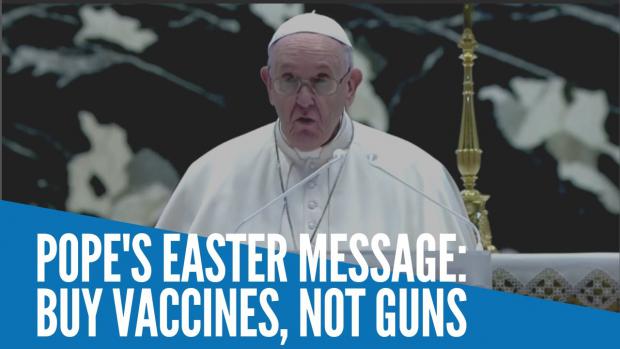 At slimmed-down celebrations in Vatican City on Sunday, the pope said armed conflict and military spending during a pandemic is wrong.

"The pandemic is still spreading, the social and economic crisis remains severe, especially for the poor. Nonetheless - and this is scandalous - armed conflicts have not ended and military arsenals are being strengthened."

He urged countries to quicken distribution of COVID vaccines, particularly to the world's poor, praised medical workers, and sympathized with young people unable to attend school.

He also called for peace in several conflict areas around the world, and singled out for praise the young people of Myanmar "who are committed to supporting democracy and making their voices heard peacefully."

This is the second year in a row that Easter papal services have been attended by small gatherings at a secondary altar of St. Peter's Basilica, instead of by crowds of thousands in the church or in the square outside.

Unvaccinated children will still need to wear masks in the classroom this fall, Fauci says

Dear Sweet Jesus! And I mean that