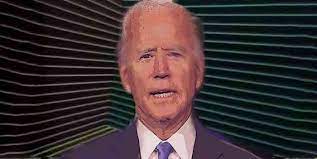 To prepare readers for marvels and innovations, I offer this piece.

Since we live in a virtual age, the image rules. A substitute for the thing itself is acceptable in many venues. If the government can spend $6 trillion it doesn't have to bail out the population from a virus that doesn't exist—$2 trillion more than the cost of World War 2—what ISN'T possible?

I can see CNN leading the way, with this sort of announcement from CEO, Jaspar X Pucker:

"Today—after consultation with our attorneys—we make this legal ruling: Our use of the term 'President' will cover a range of potential meanings. For example, it could mean 'the committee that hovers behind the Occupant of the Oval Office and decides policy, on behalf of which policy the Occupant acts a conduit (to the public)'."

"That would be one meaning. But 'President' could also mean a computer generated image (CGI) of the Oval Office Occupant, when that image delivers what the Occupant WOULD HAVE delivered, were he present."

"Here is our FAQ on the subject":

Yes. We will render an exact likeness.

CNN could decide when to deploy a CGI image of the President?

Of course. That's the whole point. But we will maintain a close relationship with the committee that hovers behind the Occupant of the Oval Office, to ensure we are accurately presenting official policy.

Is it possible that, in a single instant of time, several CGI Presidents could simultaneously appear in different locations speaking to audiences?

Yes. Getting out the message(s) is the first priority.