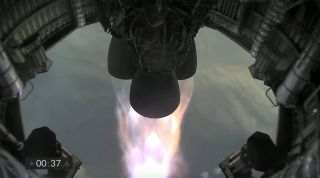 The stainless-steel vehicle, known as SN11 ("Serial No. 11"), launched on a test flight last Tuesday (March 30) from SpaceX's South Texas facilities, near the Gulf Coast village of Boca Chica.

SN11 soared to a maximum altitude of 6.2 miles (10 kilometers) as planned, and the 165-foot-tall (50 meters) craft checked a number of boxes on the way down as well. But SN11 didn't stick its landing, instead exploding in a massive fireball — because of a plumbing problem, SpaceX founder and CEO Elon Musk announced today (April 5).

CH4 is methane, the propellant for SpaceX's powerful, next-generation Raptor engine. And a "hard start" refers to ignition when there's too much fuel in the combustion chamber and the pressure is therefore too high — not a good thing for any engine.

SpaceX is developing Starship to take people and cargo to the moon, Mars and other distant destinations. The transportation system consists of two elements, both of which will be fully reusable: the Starship spacecraft and a giant first-stage booster called Super Heavy.