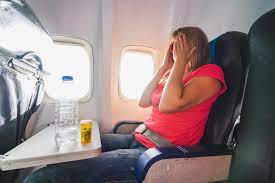 Any criticism of my friend's lack of confidence in any qualified aviatrix is answered along these lines: "She can't drive a stick shift. I should trust her with a Jumbo Jet?"

After a career of being closely associated with the air traffic control system, I can confidently opine that female pilots should be near the bottom on anyone's list of safety concerns.  Closer to the top of that list?  Affirmative action.

Affirmative action has eroded the efficacy of the air traffic control system to an alarming degree.  The air traffic controllers' strike in the summer of 1981 was a crisis that the social engineers did not let go to waste.  They replaced the PATCO workforce with many of the liberal left's favorites.  Let's just say their favorites do not include straight, white, competent, experienced males.  However, some level of competence still must be added to the mix; the nature of air traffic control demands it.  When flying tubes of flesh and jet fuel are hurtling hither and yon at breakneck speeds, someone has to break the ties.  We can't have controllers doing a "bang-up" job.

Only Vaccinated People Can Be Evacuated From Island to Escape Volcano, Says Prime Minister