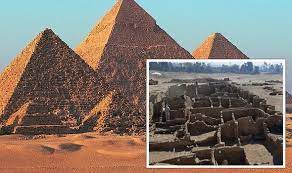 Scientists announced the discovery of the 3,500-year-old city on Thursday, lauding its intact structures left standing 'as if it were yesterday'

Today, the world was allowed a closer look at the stunning S-shaped walls which curve around the city's streets, as well as ornaments discovered inside houses, such as painted vases and opulent necklaces

The city, constructed by King Amenhotep III, a great grandfather of Tutankhamun who ruled around 1390 BC, is the largest ancient settlement ever discovered in Egypt

It was uncovered by archaeologists digging at Luxor, complete with neighbourhoods of houses, bakeries, workshops and cemeteries, as well as jewellery, pottery and mud bricks bearing Amenhotep's seal

Photos today revealed that even a fossilised fish was pulled from the city beneath the sand, as well as the skeletons of men and their livestock

Most human origins stories are not compatible with known fossils