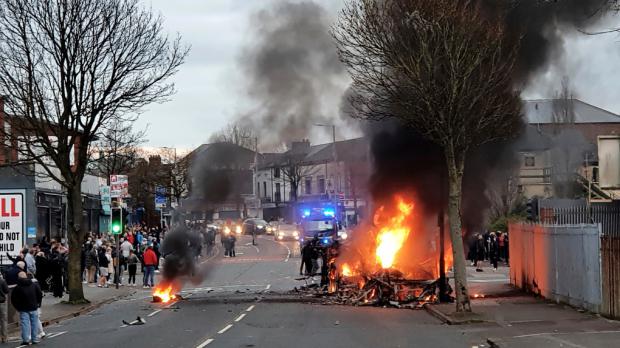 The violence is some of the worst in decades as governments in Belfast, London, and Dublin have denounced the social unrest, according to BBC.

Unrest broke out a week ago amid rising post-Brexit tensions. A more immediate catalyst was a decision a few weeks back by public prosecutors not to charge anyone with alleged breaches of COVID regulations at an IRA funeral that sparked unionist outrage.

The unrest began on Mar. 29 in a small city in Northern Ireland called Londonderry. Since then, protests and rioting have spread to Belfast, Carrickfergus, Ballymena, and Newtownabbey.

The rioting has mainly been loyalist youths hurling petrol bombs, bricks, and fireworks at police officers and their vehicles. But on Wednesday, the chaos intensified into sectarian fighting over a peace wall in west Belfast that separates Protestant loyalist communities from predominantly Catholic nationalist communities who want unification with Ireland.

Irish nationalist and pro-British loyalists clashed at the peace wall, igniting fears about the revival of the "The Troubles," a dark period when both sides fought a low-level war against each other late 1960s to the late 1990s. The conflict claimed the lives of nearly 3,600 people as nationalists and unionists fought. At times, the conflict spilled over into the Republic of Ireland, England, and mainland Europe.

"We are gravely concerned by the scenes we have all witnessed on our streets," the compulsory coalition, led by rival pro-Irish Catholic nationalists and pro-British Protestant unionists, wrote in a statement.