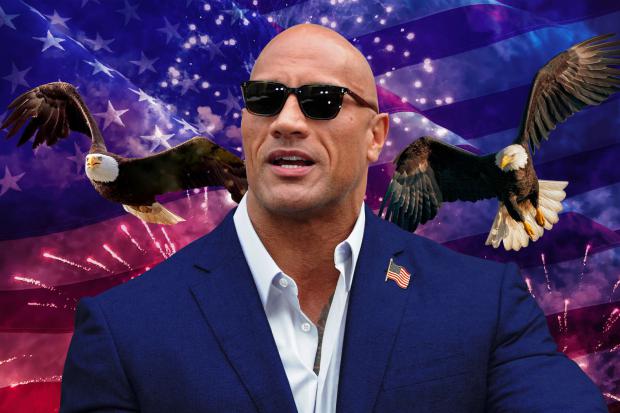 "I do have the goal to unite our country," he says. "I also feel that, if this is what the people want, then I will do that."

Whether or not Johnson makes a run for the White House, he notes that he is "passionate about making sure our country is united."

"A united country, as we know, is its strongest," he says. "I want to see that for our country."

Johnson's statement comes after a poll found that at least 46 percent of Americans would support the actor's presidential campaign, according to Newsweek.

"Humbling," Johnson previously called the poll. "I don't think our Founding Fathers EVER envisioned a six-four, bald, tattooed, half-Black, half-Samoan, tequila drinking, pick up truck driving, fanny pack wearing guy joining their club, but if it ever happens it'd be my honor to serve you, the people."

On Johnson's show, Young Rock, his fictionalized older-self is running for president in 2032. When ET spoke to Johnson in 2018, he confirmed that he took meetings to "understand more" about the job.

"[The meetings are] just really to understand more and to learn more," he said at the time. "... The idea of running for president has been very flattering that a good amount of people have been wanting me to run and, honestly, it's so flattering, but I feel like the most respectful thing I could do is just learn as much as I could possibly do."