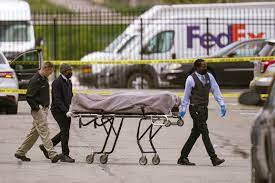 Paul Keenan, the special agent in charge of the FBI's Indianapolis field office, said Friday that agents questioned 19-year-old Brandon Scott Hole after his mother called police to say that her son might commit "suicide by cop." He says agents questioned Hole based on items found in his bedroom. He did not elaborate on what those items were. No crime was identified and the FBI says it did not identify Hole as espousing a racially motivated ideology.

THIS IS A BREAKING NEWS UPDATE. AP's earlier story follows below.

INDIANAPOLIS (AP) — Police scoured a Fedex facility in Indianapolis and searched the gunman's home Friday, looking for a motive for the latest mass shooting to rock the U.S., as family members of the eight victims spent agonizing hours awaiting word on their loved ones.

The shooter was identified as Brandon Scott Hole, 19, of Indiana, Deputy Police Chief Craig McCartt told a news conference. Investigators searched a home in Indianapolis associated with Hole and seized evidence, including desktop computers and other electronic media, McCartt said.

McCartt said Hole was a former employee of the company and last worked for FedEx in 2020. McCartt said he did not know why Hole left the job or if he had ties to the workers in the facility. He said police have not yet uncovered a motive for Thursday's shooting but added that police seized a gun from him last year.