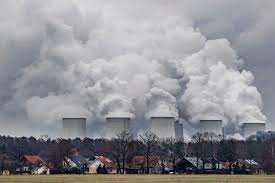 But  eight days later the wind wasn't blowing and according to Pierre Goslin the system got so unstable that the managers had to turn back on some of the coal power.This  on-off-cycle repeated so many times that one large plant — Heyden  –was restarted six times in the next eight weeks.

The Federal Network Agency have reclassified the four of the big plants as "system relevant" which means they have to hang around on standby ready to rescue the grid at any time. So the largest efficient and cheap generators on the grid will be paid to sit around waiting for the unreliable expensive energy to fail.

The Federal Network Agency has now confirmed that it has reclassified the Heyden, Datteln, Walsum 9 and Westfalen power plants, which had already been shut down, as system-relevant and that they now must remain on standby as reserve power plants. The owners will therefore be required to continue operation in the short term.

Never mind that this sporadic operation of these coal plants is horribly inefficient and costly, as you will find out below.