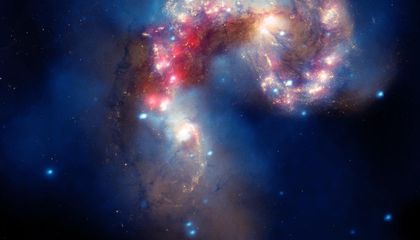 In other words: We live inside a computer that learns.

The big idea: Bostrom's Simulation Argument has been a hot topic in science circles lately. We published "What if you're living in a simulation, but there's no computer" recently to posit a different theory, but Microsoft's pulled a cosmic "hold my beer" with this paper.

Dubbed "The Autodidactic Universe," and published to arXiv today, the paper spans 80 pages and lays out a pretty good surface argument for a novel, nuanced theory of everything.

Here's my take: Based on my interpretation of this paper, the universe was either going to exist or it wasn't going to exist. The fact it exists tells us how that worked out. Whatever contrivance (law) caused that to happen set the stage for whatever was going to happen next.

The paper argues that the laws governing the universe are an evolutionary learning system. In other words: the universe is a computer and, rather than exist in a solid state, it perpetuates through a series of laws that change over time.

How's it work? That's the tough part. The researchers explain the universe as a learning system by invoking machine learning systems. Just like we can teach machines to perform unfolding functions over time, that is, to learn, the laws of the universe are essentially algorithms that do work in the form of learning operations.